I grew up in a family where nobody was a pilot.

We loved skiing (I wanted to become a ski instructor!), sailing and mountain climbing.

At the age of 16, I won a ski race and was very surprised to realize that I’d receive, as well as a cup and a medal, a maiden flight. To be polite, I accepted.

But, as soon as the pilot gave me the controls, I knew that I would fly one day. But when? My parents never said no, but never yes!

At the age of 19½ I had to earn my first salary as a young German teacher, to pay for my first flight lesson in Besançon, the town where I lived at that time.  Then, I passed my aircraft and glider licenses.

Some years later, I moved to Geneva and was a student at the Ecole IFR Les Ailes, where I passed both theoretical Commercial and IFR exams, at the same time as Jacques BREL, whom I remember as a very funny guy, but an extremely serious pilot.  At that time, I had a dream to become an aerobatic pilot. But things were not that easy; you had to find an instructor, an aircraft, time and … money!

After 2 years spent at La Ferté-Alais, the paradise of pilots close to Paris, where I was lucky enough to fly solo big warbirds such as T6, Sipa 121, as well as old and wonderful machines; Caudron G3, Stampes, Bückers and such. After having obtained my Flight Instructor license, I decided to learn serious aerobatics.

We were in August 1974, my father had died 9 months before, and the sky was the one and only place where I could think of him with a smile. I couldn’t imagine a more perfect instructor than Jean Eyquem, who later became my coach 2 years later for the French Aerobatic Team. The Stampe had no secret for him, we called him ‘The Chef’ and I virtually offered my 1st Aerobatic Cycle to my Dad.

At the end of that year, I became a commercial pilot.  Two years later, I became an aerobatic instructor.

At the end of the Winter 1978, I passed my Qualification Montagne and Glacier with a young and talented examiner  who had just finished his medical studies. What he didn’t know, nor did I, that we would marry one year later, and he would become the father of my 2 daughters: Caroline and Julie.

But, in the Summer 1978, my priority was to participate at my 1st World Aerobatic Championships in Ceske Budejovice, Tchekoslovakia, where I became Vice-Championne du Monde par Equipe. Wow!

Between 1978 and 1993, I have been a member of the French Aerobatic Team, won 17 international medals and 7 national titles.  I realize that I only stopped aerobatics 3 months before my babies were born. But hush … it was not very legal! 8 days after Julie’s arrival on earth, I was already giving aerobatic lessons. But, you know, I may not be a good example.

During all these years, I have tried to be a serious pilot as well as a good mother… Not that easy when you practice and fly away from home for at least 3 months a year. But I have 2 wonderful daughters who were able to forgive their original mother, as I may not have been the typical traditional doctors wife.

When she was 25, I have had the great pleasure to be Caroline’s flight instructor, and the great emotion to see her fly solo my Cap10 after 9½ flight hours.

But, as we say in French “La vie n’est pas un long fleuve tranquille” (life is not always a long and calm river).  I was maybe not conventional enough, or simply not ‘perfect’ enough to stay in my comfortable and bourgeois life, and in the meantime Caroline and Julie’s parents had divorced.

Some years later, as I was flying the Finale of the Breitling World Cup in Florida, I visited Daniel and Montaine, the 2 pilots of the French Connection, who were friends of mine. Their instructor spoke such a good French that it was difficult to believe he was American. His name was Adam Shaw.  Two months later, he came to France and became Caroline and Julie’s stepfather.

Today – after another ‘la vie n’est pas un long fleuve tranquille’ episode, he is my grandchildren’s “Papy Adam” and the wingman of CAPTENS, the formation team he proposed me to create with him 11 years ago.

I hope that Daniel and Montaine – where ever they are – are proud of us.

Our 2 Cap 10s are white and blue, kind of  ‘yin-yang’ painted, with stars extending to the infinite.

Our demo sequence represents the various symbols of a couple’s life: fusion, separations, crossings and always ends with a ‘heart in the sky’, which is, finally, the best proof of our mutual trust.

Together with my family, aviation is the core of my life.

Of course, everything has not always been simple. I have had accidents, some of my aircraft have been destroyed, and I have been extremely lucky to be able to get out of them without too much damage!

What else? I wrote a book ‘Jeudi 12’ (you know, just the day before Friday the 13th which is, depending of what you believe in, either a lucky or an unlucky day). The second title being ‘Une vie à l’envers ‘ (An upside down life), I flew across the Channel upside down, to honour the memory of Louis Bleriot.

I still love skiing, I play (not very well!) the piano, love wood-painting, and by the way, am a therapist (hypnosis and such) since 17 years now. 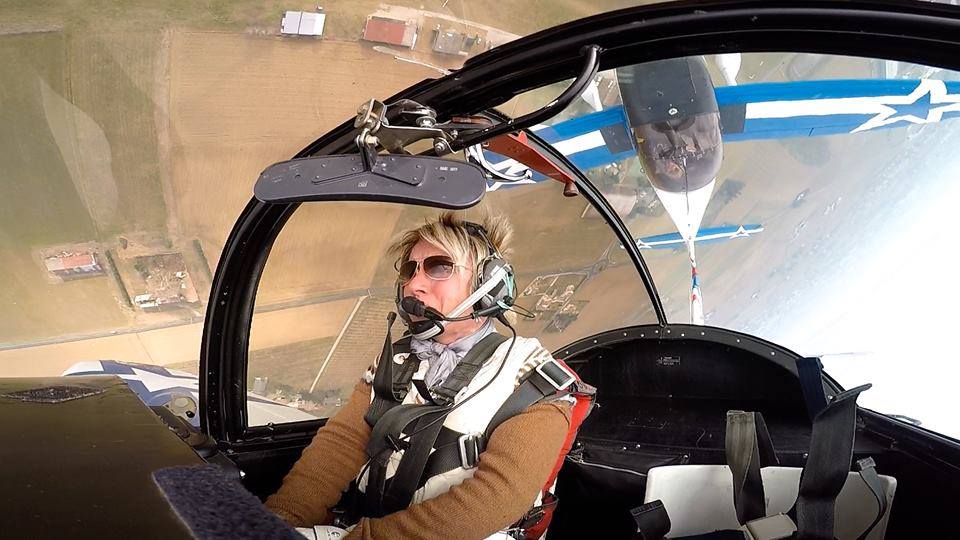